OUT AND ABOUT AT THE PLACES THAT MATTER – FESTIVALS, PARTIES, SHOWS, BEYOND

Bushwig is unlike any other drag show or festival in the world – unlike even its spiritual predecessor Wigstock. With 150 drag queens performing over a single weekend in September, the festival boasts a community that is aesthetically diverse and incredibly inclusive—promoting performers of all genders, sexualities and races. From drag cosplayers (Sailor Mars to Michelle Pfeiffer-era Catwoman in fetish heels) to cisgender girl vocalist Sateen and her drag queen husband / guitarist Exquisite, performances on stage were surreal experiments that reflected the festival’s slogans, which blaze: “Gender is over!”

The festival was conceived by two drag queens, Matthew Mendoza (known as “Horrorchata”) and Simon Leahy (“Babes Trust”), who wanted to celebrate the queer drag and music thriving in their local community and serve up the most cutting-edge drag performances in the world.

Legendary drag queen Lady Bunny herself – co-creator of Wigstock – performed at the festival this year and even passed the proverbial torch on to Bushwig’s founders during her headline performance. “The vibe of Bushwig was electrifying with a wild spirit, which even a little rain couldn’t dampen,” she said after the festival. “It’s now in its fourth year and better organized than Wigstock in its tenth! Great sound and stage, revelers in and out of drag, and one with a wig and heels and nothing else.”

Lady Bunny went on to praise Bushwig’s focus on promoting unconventional and DIY aesthetics: “The Bushwig queens are trying to bring something funky and unique to a stale and corporate NYC. Vegan snack bars, a Sober Sissies space, singers performing interesting, original music…Amen to that!” 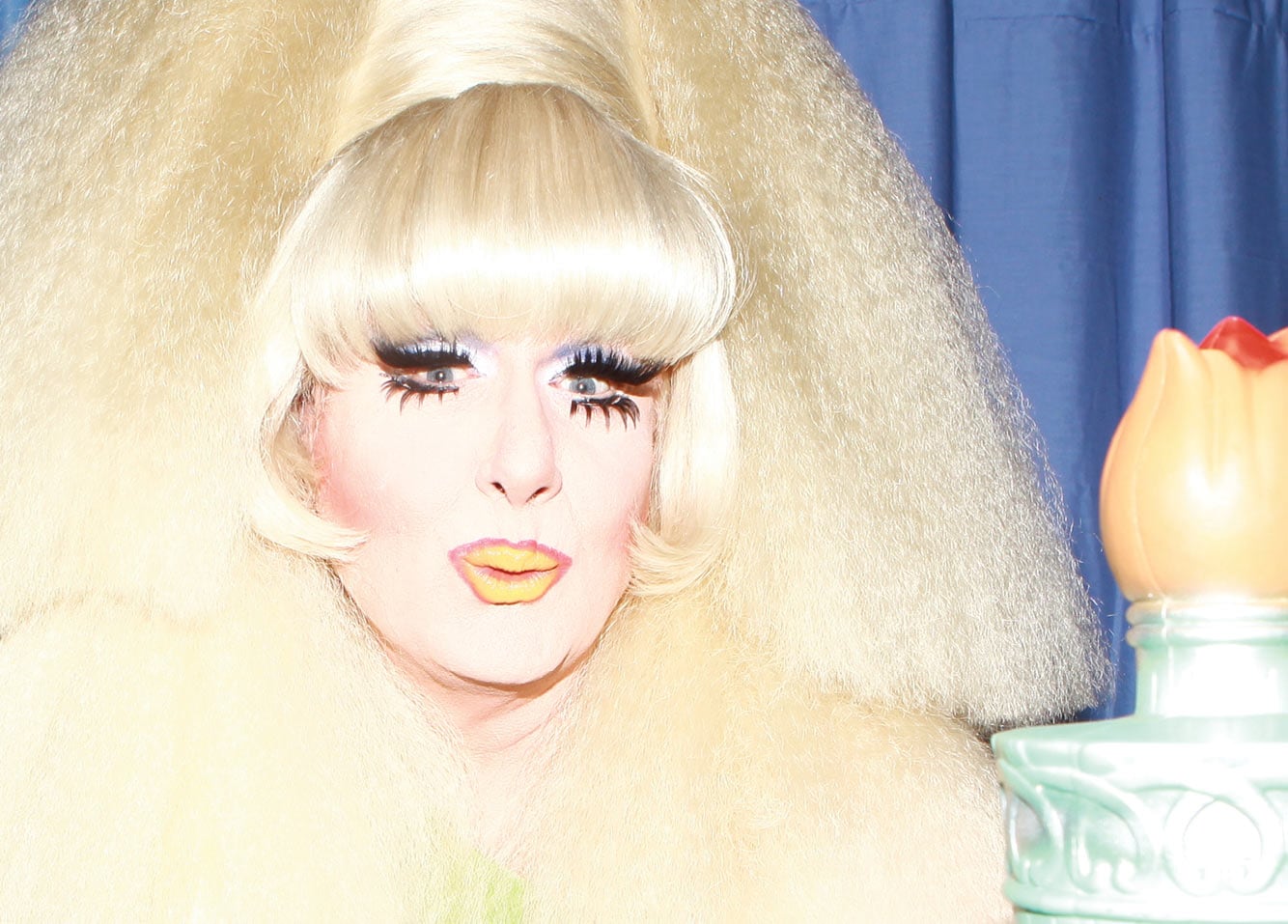 When asked how Bushwig differentiates from its predecessors, co-founder and mother of the House of Bushwig, Horrorchata says, “We’re definitely younger! We’re just giving art, we’re giving everything, there are no boundaries to what drag is any more. It used to be, ‘Oh I’m going to put on a dress and lip sync to a song’ – but it’s no longer just pageantry. Drag queens were only supposed to look like women, and now people are wearing beards and expressing themselves in new ways. People are doing some crazy stuff!”

“We’re just giving art, we’re giving everything, there are no boundaries to what drag is any more.” – Bushwig co-founder Horrorchata

“I want the queens to do more than just lip sync because there’s so much talent around and it just needs nurturing or a little push,” says co-founder Babes Trust. “It’s important to look at drag from different angles.”

From synchronized musical dance numbers, bloody horror special effects, mastery of musical instruments or elaborate, self-designed costumes, this new generation of drag queens certainly has a lot to offer. For participating performers however, the event is really about creative communion. Brooklyn Nightlife’s Drag Queen of the Year, Untitled Queen, describes Bushwig as a time when artistic peers can bring their love of dance, theatre, drag and music into one magical weekend: “It is so beautiful to see all the smiling faces of your friends as they prepare to perform. Although Bushwig has grown in roster and venue size, it still retains all the magic of being homegrown, DIY and Brooklyn-made…” HORRORCHATA
From San Antonio, Texas. Mother of the House of Bushwig, co-founder of Bushwig Drag Festival.

What is different about this year?
We have much more space. Onderdonk House holds about another 1000, so people can run and roll around in the fields. I’m not on the schedule because we’re very tight this year, but if there’s time for me I already have my look, my number, my dress, my wig! I’m ready to go and it’s definitely going to be a 90s number if I do it—I’m a fly girl, you know. Texas represent!

How many times have you changed today?
I’m doing about five looks. Earlier I was giving you Lady Bunny, big hair with a flowy dress. This piece right now is from Aja, another Brooklyn drag queen. For my next dress, I’m wearing a collaboration with BCalla—he dressed Miley’s entire drag act for the VMAs.

“If Lady Bunny could do it for over ten years, why can’t Bushwig do it? That’s what I say. She just handed me the torch on stage during her set.” — Horrorchata

So what’s the future for Bushwig?
If Lady Bunny could do it for over ten years, why can’t Bushwig do it? That’s what I say. She just handed me the torch on stage during her set. She’s one of my inspirations on why I want to do drag, and how Bushwig happened in the first place.

Tell me about your look today. What are you going for?
I call it “Pin-up Ghoul.” Sometimes I’m just a dead girl—but I’m New York City’s Favourite Dead Girl—which is my official title. I always rock a 50s shape with a ghoulish overtone to it.

We need more queens like you with tattoos.
They’re getting more and more common and there are a lot of pretty girls out there who are covered in tattoos, which I love! One of my favorite performers is Jenny Moore and I’m SO BUMMED because she’s so gorgeous. She’s from Philly; I’m obsessed with her.

Can you give me a sneak preview of your act?
I’m doing one of my geek acts—that’s what it’s called in the sideshow world—it’s like a performance they do to shock people, where some acts would bite the heads off chickens and things like that. I’m doing my cigarette-eating number, which is one of my favourites.

What do you think makes Bushwig so special?
It’s a family reunion. Every year, it’s like you meet cousins you’ve never had! The family just keeps growing and it ends up being a big family affair that lasts all weekend. Spending time together, getting drunk together, performing and celebrating the last bit of summer together. 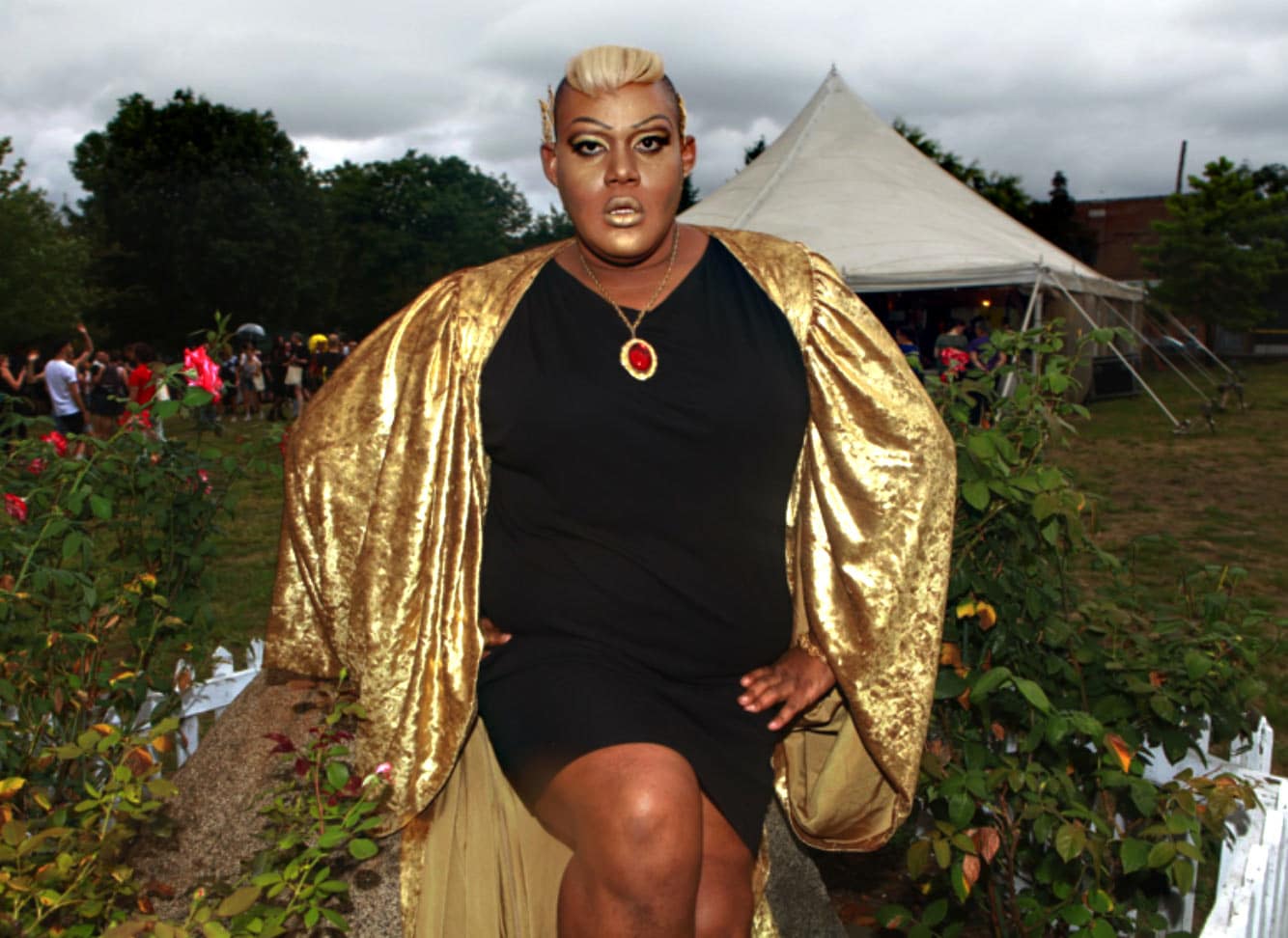 Have you prepared a special act?
This performance is actually three years in the making! I was too scared to do it before, but now I’ve reached a point in my career where I just don’t give a fuck, so I’m just going to do it. I’m doing a 9/11 number—I have rehearsed twice and cried both times.

What inspired you to perform this political act?
I am always political in numbers I do. As a person who does a lot of drag in Brooklyn and the queer community, I have that freedom to do whatever I want and hope for the best. I usually get a good response from people. I think they’re going to understand it’s coming from a loving place in a creative space.

Tell me about your look.
I am very inspired by Advanced Style, the blog. I want to be a really fashionable old woman, very Manhattan. My name – Boniva – is actually a calcium supplement for old women.

Who is your favourite old lady to dress like?
Iris Apfel. Of course! I love the sound of her loud bangles. In the Iris documentary, the first minute is just the sound of her jewellery clacking and I was like, “This is all you need for this movie!”

Who are you most excited to see at Bushwig this year?
I was really excited that Lady Bunny was here because I went to Wigstock back in the day, and I think it’s really cool that she acknowledges the younger generation and that they support her.

Tell me a little about your background.
I was born on Governors Island! It was a military coastguard base and was shut down in 96, so I lived there until I was 12. I studied art at Parsons. Today is my 31st birthday and I’m performing at the fourth annual Bushwig.

This is a big look you’re wearing! Tell me about your relationship with clothes.
My drag is all part of my artwork. The outfits are DIY and sculptural experiments. I make my art the same way I make my drag—it’s all one and the same.

What was your look and performance today inspired by?
I wanted to perform “Bridge Over Troubled Water” and a friend of mine suggested that I should do a troll look. I thought that would be perfect because I liked this idea of a troll living under a bridge. I really love this mix between unexpected beauty and things that appear like garbage but isn’t. There’s everything in this dress—it looks like I’ve been collecting garbage all around Brooklyn—there’s even a little rat somewhere in here. Not real of course, I would be petrified!

Words by Veronica So Photography by Maro Hagopian